I had a bed of asters last summer, that reached clear across my garden in the country. Oh, how gaily they bloomed. They were planted late. On the sides were yet fresh blossoming flowers, while the tops had gone to seed. Early frosts came, and I found one day that that long line of radiant beauty was seared, and I said, “Ah! the season is too much for them; they have perished”; and I bade them farewell.

I disliked to go and look at the bed, it looked so like a graveyard of flowers. But, four or five weeks ago one of my men called my attention to the fact that along the whole line of that bed there were asters coming up in the greatest abundance; and I looked, and behold, for every plant that I thought the winter had destroyed there were fifty plants that it had planted. What did those frosts and surly winds do?

They caught my flowers, they slew them, they cast them to the ground, they trod with snowy feet upon them, and they said, leaving their work, “This is the end of you.” And the next spring there were for every root, fifty witnesses to rise up and say, “By death we live.”

And as it is in the floral tribe, so it is in God’s kingdom. By death came everlasting life. By crucifixion and the sepulchre came the throne and the palace of the Eternal God. By overthrow came victory.

It is by being cast down and not destroyed; it is by being shaken to pieces, and the pieces torn to shreds, that men 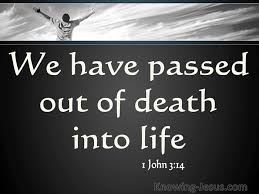 become men of might, and that one a host; whereas men that yield to the appearance of things, and go with the world, have their quick blossoming, their momentary prosperity and then their end, which is an end forever.

“Measure thy life by loss and not by gain,
Not by the wine drunk, but by the wine poured forth.
For love’s strength standeth in love’s sacrifice,
And he who suffers most has most to give.”