“The eyes of your understanding being enlightened; that ye may know what is the hope of his calling, and what the riches of the glory of his inheritance in the saints,” Ephesians 1:18

The Apostle Paul is pleading for God to reveal His Spirit to us so that we can have a vision. This vision traces the path on which to walk in such a way that it will take us on to the successful completion of what God has entrusted to us. Throughout Biblical history, we can see that, in order to fulfil His purpose, God chooses a man to whom He reveals His will and gives His plan. God surrounds him with people who identify with him and decide to support everything he does. They were like the strength that propels the vision. I believe that every person is capable of achieving success when they have a creative idea from God. All they have to do is put all their effort into making it a reality. Implementing it leads us to small victories. We face battles day by day. This leads us to defeat obstacles, reach goals, and achieve dreams, without resting until we obtain the victory we long for.

Restoring the sight of Bartimaeus was one of the greatest miracles that Jesus performed. This miracle is a prototype of those individuals who cannot see the wonders in the spiritual realm because, although they have eyes, they cannot see. Just as Bartimaeus had to defy circumstances in order to obtain the miracle, we must do the same in order to receive sight for our spiritual eyes and to see the blessings that God has in store for us. Today can be our greatest miracle with our eyes open to see and behold the place that God has prepared for us and to be seated on the right hand of God our Father.

The story a preacher told caught my attention some years ago about a man who wanted to perform an experiment with some blind people. He placed four of them in front of an elephant. None of them knew what the thing in front of them was, but each one had to describe the impression perceived while feeling the object. The first man touched a leg of the elephant to describe it as a column. The second one touched the belly of the animal and said it was a wall. The other one touched its tail and said it was a broom. The last one touched a tusk to say it was a dagger. What is the moral of this story? We will never have the correct description for things if we lack vision. Solomon said, “where there is no vision the people perish.” Proverbs 29:18

We are the results of God’s vision? With great diligence, God thought about the tiniest details of a human being, then he dedicated Himself to developing His perfect vision; He did not rest until His work was finished. Saint Paul referred to this when he said, “For we are his workmanship, created in Christ Jesus unto good works, which God hath before ordained that we should walk in them.” (Ephesians 2:10). God saw the big picture beforehand. He knew that after creation, man would have a relationship with Him. Then the man would disobey, which would cause them to drift apart because of sin. Then, the highest price of man’s redemption would have to be paid. We are the result of what the Lord did for us. God did not save us to go on living as slaves to sin. He saved us so that we can walk according to His will, which is revealed in His Word. He wants us to become channels of blessing for other people. Because of redemption, we are now human beings who have good gifts and an unending source of blessing; that source is in our spirit. A blind person may have all the instructions to go from one place to another, but will always find obstacles in his way that could have been avoided if he had sight. In a similar way, even though you can have a clear idea of the steps you have to take to fulfil a divine purpose, it is necessary for your spiritual eyes to be opened.

SOMETHING TO THINK ABOUT
I was watching megastructures, a TV program that I love. On a certain occasion, they showed how the highest building in Dubai was built. The work had been developing as planned, but they were forced to stop when a small fault was found on the 44th floor. It was necessary to get to the root of the issue because this could affect the whole structure. Thank God they found out that it was nothing structural, it was just that someone had drawn a mark incorrectly. Now think about your life as a skyscraper. You may be living as a Christian for many years and appears to be a perfect life before man and God. While you may appear flawless before man but there is something that God sees and needs to have it corrected, It may have gone unnoticed for a while until you find that there is no growth. It may be a thorn in the flesh similar to Paul but you will need to hear from God that His grace is sufficient for you. I will urge us to talk to our Father and seek where we have gone wrong. He will fix it for us.

Perhaps you make plans to live sixty or seventy years, or even more. Each year of your life is like a floor, and there can be moments when the spiritual area will suffer from faults and failings. If you do not make the correction quickly, this will not only affect your personal life but also the lives of your children, and there will be consequences not just in this world but in eternity as well. In one of His parables, the Lord Jesus said, “16 And he spake a parable unto them, saying, The ground of a certain rich man brought forth plentifully: 17 And he thought within himself, saying, What shall I do, because I have no room where to bestow my fruits? 18 And he said, This will I do: I will pull down my barns, and build greater; and there will I bestow all my fruits and my goods. 19 And I will say to my soul, Soul, thou hast much goods laid up for many years; take thine ease, eat, drink, and be merry. 20 But God said unto him, Thou fool, this night thy soul shall be required of thee: then whose shall those things be, which thou hast provided? 21 So is he that layeth up treasure for himself, and is not rich toward God.” (Luke 12:16-21).

TODAY’S DECLARATION
“God opened the eyes of my understanding to see all the good things that He has prepared for me. May we find the comfort, joy and happiness in serving the Lord and being the example to others. 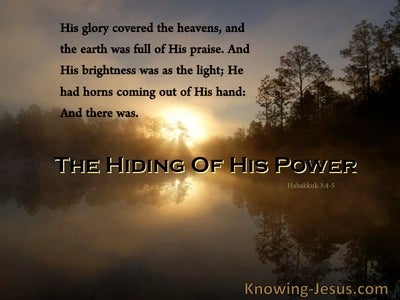 “O LORD, be gracious...we have waited for You. Be their strength every morning & Our salvation in the time of distress.” Isaiah 33:2