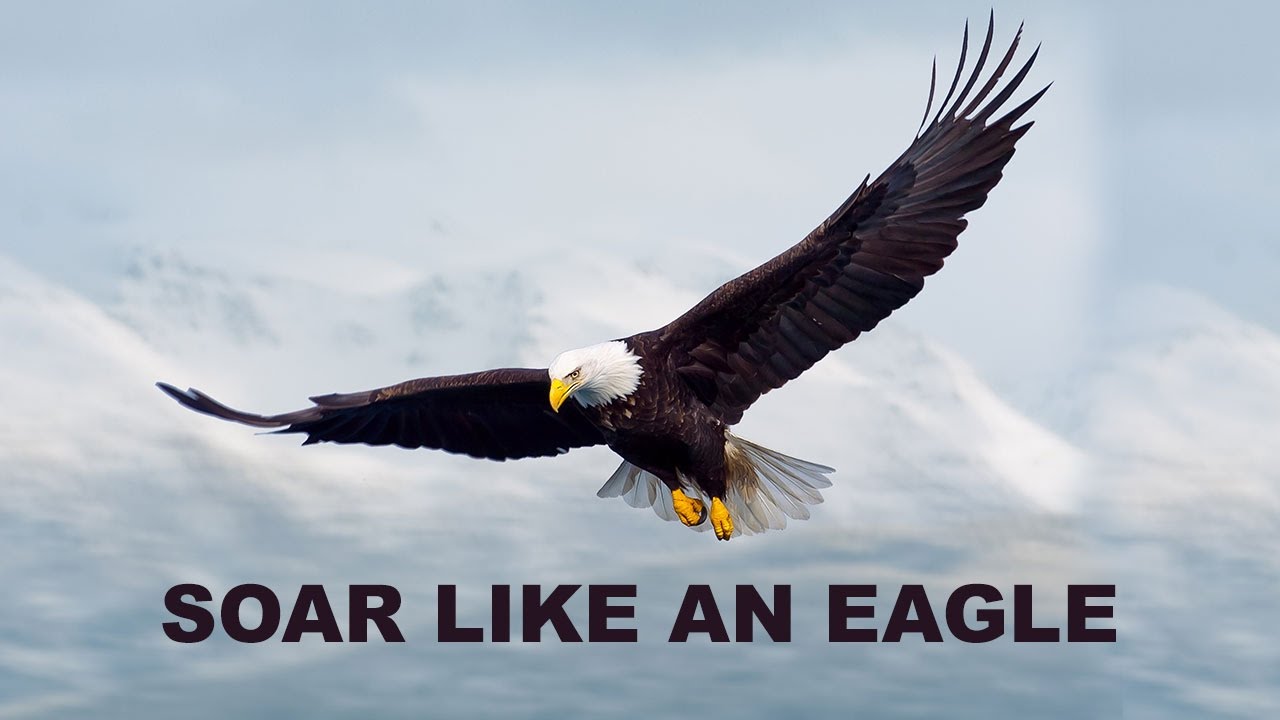 But they that wait upon the LORD shall renew their strength; they shall mount up with wings as eagles; they shall run, and not be weary; and they shall walk, and not faint. Isaiah 40:31

Did you know that a bald eagle can spread its seven-foot wingspan and soar up to ten thousand feet in the sky? The next time you’re in an aeroplane, keep your window shade up during takeoff. Then, when the crew says, “We’ve reached ten thousand feet; you may now use your electronic devices,” take a look outside. You’ll see what an eagle sees. They soar through the sky at forty miles per hour, and they can spot their prey from over two miles away. And once it sees dinner, an eagle can nosedive for the kill at speeds up to one hundred miles per hour.

Eagles are at the top of the food chain for a reason!

In case you’re wondering, I did know that eagles were created to soar, not stand on a stump. But those who hope 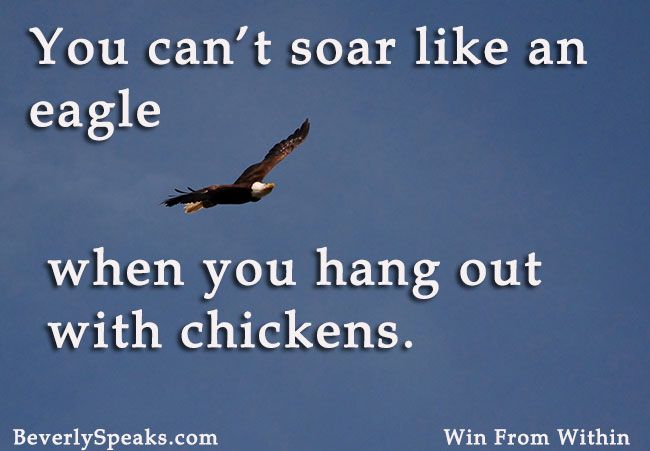 in the Lord will renew their strength. They will soar on wings like eagles; they will run and not be weary, they will walk and not be faint. (Isaiah 40:31) The eagle is a majestic bird that represents inspiration and courage. According to my research, it is the only bird that will not try to avoid a storm. Though eagles don’t seek out a storm, when one occurs, they hang on until they can soar above it. It occurs to me that some people are like eagles. It isn’t that they have no storms or difficulties in their lives; all of us do. What makes them “eagle people” is their tenacious hold on hope. When a storm comes, instead of worrying, they draw upon the inner resources that come from faith to rise above the storm and soar. In this book, we will explore the resources available to us as Christians when storms suddenly appear upon our horizons.  Do they miss the feeling of their beaks piercing the wind? Do they ever forget they’ve been injured and try to fly? Have they lost the desire to fly altogether? Do they stare at the sky all day and wonder, What if?

The image of God as an eagle is found throughout the bible but primarily in the old testament. It is a sign of strength and able to bear much weight, as Moses wrote, “You yourselves have seen what I did to the Egyptians, and how I bore you on eagles’ wings and brought you to myself” (Exodus 19:4) This further symbolized when Moses said of god “Like an eagle that stirs up its nest, that flutters over its young, spreading out its wings, catching them, bearing them on its pinions” (Deuteronomy 32:11). The eagle can bear up their young on its pinions, which are the outer wings. This is basically what God did when He brought Israel out of captivity from Egypt and continued to bear her up in wanderings on the wilderness.

The psalmist often referred to God in the imagery or as having attributes of an eagle and especially when he wrote that it was God “who satisfies you with good so that your youth is renewed like the eagles” (Psalm 103:5). Isaiah also saw the symbolic strength of God as depicted in an eagle when He wrote: ”but they who wait on the Lord will renew their strength; they shall mount up with wings like eagles; they shall run and not grow weary; they shall walk and not faint.” (Isaiah 40:31)

The Eagles as God’s rod against Israel and Judah

God also uses eagles in the bible to describe different powers which will come down swiftly upon Israel if she refuses to live in obedience to Him. God spoke through Jeremiah in warning Judah about a coming threat from the north stating “Behold, he comes up like clouds; his chariots like the whirlwind; his horses are swifter than eagles-woe to us, for we are ruined.” (Jeremiah 4:13) If the nation continues in idolatry and refuses to repent, writing about the coming enemy. Their horses are swifter than leopards, more fierce than the evening wolves; their horsemen press proudly on. Their horseman comes from afar; they fly like an eagle swift to devour.

The Eagles as God’s Protection

God refers to himself as an eagle for several different reasons and one example is His protective nature as in Psalm 91:1-4: “He that dwelleth in the secret place of the most High shall abide under the shadow of the Almighty. 2 I will say of the Lord, He is my refuge and my fortress: my God; in him will I trust. 3 Surely he shall deliver thee from the snare of the fowler, and from the noisome pestilence. 4 He shall cover thee with his feathers, and under his wings shalt thou trust: his truth shall be thy shield and buckler.”  Eagles represent sovereignty and supremacy and how fitting since God is the real ruler of kings and priests (Daniel 2:20/5:18-21, Proverbs 8:15-16, Romans 13:1-2) but also when the storm hits, eagles fly far above the storms, indicating that God is never affected by conditions for He is also over nature. 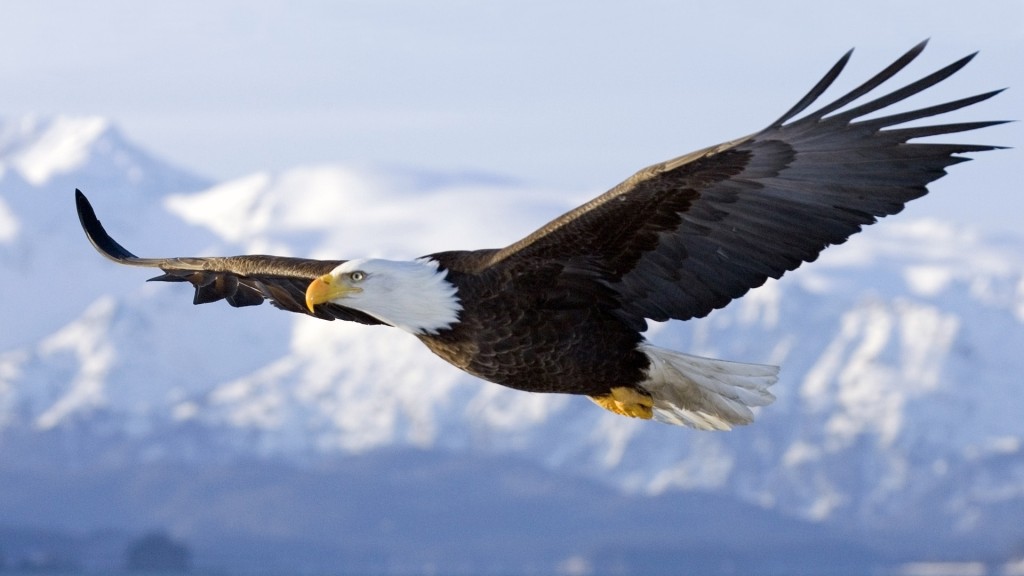 If you have ever watched an eagle soar, it is nearly motionless and stationary. This absolute lack of movement makes it naked to the eyes of its prey. The majestic bird may have a wingspan over 8 feet and weigh up to 15 pounds and live up to 40 years. Eagles are indigenous to North America but they used to be predominant in Palestine at one time. They are also the most attentive parents of all bird species and perhaps the greatest teachers of their young, and like doves, they remain monogamous until death. God is like an eagle, He covers us and He shadows us Psalm 36:7, 63:7, 91:1-4 1 Kings 8:7, covers us Psalm 91:1-4. hides us Psalm 17:8 and is even under us Psalm 36:7.

Please hear me on this: you are capable of pursuing your dreams. As human beings, we’ve been uniquely fashioned and lovingly crafted in the image of our God, the Creator of the universe. Each one of us is designed for greatness. Each one of us has been created to soar!

That raises the question: Why don’t we? Why do so many people settle for life on a stump? I think it’s because they believe they’re like those eagles, lacking the strength or the ability to soar. Maybe they used to believe they could fly, but no longer. Something happened that pulled them down to the ground, and now they don’t have the faith or confidence to fly again. I believe that they were trapped in a cage, like the things of the world. Forgetting that those things only last for a period of time.

This is something we all have to deal with at different times in our lives. We encounter obstacles and lies that — if we allow them to — convince us that we’re unable to soar. These obstacles are like weights that tether us to the ground and cause us to surrender our dreams.

Want proof? Just look through the Bible and try to identify one of the people we often call “heroes” of the faith who hasn’t had to overcome obstacles on their journey to fulfil God’s calling. Peter surely felt like a pretty big failure when he denied Christ. John and Mark’s missionary journey got so hard that he essentially quit on Paul and Barnabas midway through. Elijah literally ran away when King Ahab and Jezebel got mad at him (and that was after God had already done a bunch of amazing miracles through him, by the way). And the most important person of all, Jesus, was criticized, ignored, made fun of, attacked, arrested, beaten, and eventually murdered on the way to completing God’s purpose for His life and saving all humankind.

In fact, Jesus’ sacrificial death is exactly what Lent is all about. As you reflect on the seminal moment of all human history and prepare to celebrate the Resurrection, may you remember that God is asking you to chase your dreams and fight through the obstacles in your path? Because obstacles will come and roadblocks are normal, but you were created to soar like an eagle. Don’t relegate yourself to live on a stump.

Are you soaring? You’re meant to! You were created to soar! Chase your dreams! Follow the path God set out for you and don’t get stumped! You cannot hang out with chickens and soar like an eagle. Come share your thoughts with us on our website http://www.mysticalorderinc.org We want to hear from you!

HH, Sir Godfrey Gregg D.Div And these are the kings that reigned in the land of Edom, before there reigned any king over the children...
2021-01-13 • 0 Comments

THE HIGHER PURPOSE OF WINTER