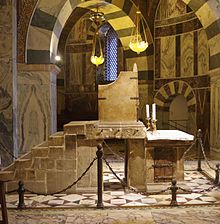 A consideration of Solomon’s unique and magnificent throne described in 2 Chronicles 9. 17-19 suggests a comparison with 1 Timothy 3. 16. The throne of Solomon, of which it is said, “There was not the like made in any kingdom”, had six steps leading up to it, and the verse in 1 Timothy 3 records six facts concerning the Lord Jesus Christ’s coming into the world, and His testimony here before being “received up in glory”, “far above all principality, and power, and might, and dominion, and every name that is named, not only in this world, but also in that which is to come”, Ephesians 1:21. The chronicler describes Solomon’s throne as, “a great throne of ivory” overlaid “with pure gold”. This des­cription has a typical lesson to teach, in that ivory speaks of death, while gold is so often in the Scriptures sym­bolic of God’s glory. “The sufferings of Christ, and the glory that should follow”, 1 Peter 1:10-11, was a baffling communication of the Spirit to the Old Testament prophets. Peter himself was in no wise ready to accept the word of his Master when He told him that “he must go unto Jerusalem, and suffer many things of the elders and chief priests and scribes, and be killed, and be raised again the third day”. Matthew 16:21. This difficulty was not peculiar to Peter, for there were the two sad travellers journeying “to a village called Emmaus”, and the Lord Jesus addressed them, “0, senseless and slow of heart to believe in all that the prophets have spoken! Ought not the Christ to have suffered these things and to enter into his glory?” Luke 24:25-26 It is a noticeable fact in the ways of God with us that He so often works towards the brighter side of things. In the creation record, the concluding remark concerning each of the six days work is “the evening and the morning”. The psalmist also speaks of the weeping that “may en­dure for a night, but joy cometh in the morning”, Psalm 30:5. The Lord Jesus, ere He left His own to go to the cross, said to them, “ye shall be sorrowful, but your sorrow shall be turned into joy”, John 16:20. The dark shadow of the cross of shame and suffering would be dispelled by the radiance and the glory of His resurrection.

Solomon’s throne, in its typical teaching, speaks of “a greater than Solomon”, who ascended to the place of highest honour and authority by way of “death, even the death of the cross”, Philippians 2:8.

Through weakness like defeat, He won the mead and crown;

Trod all our foes beneath His feet, By being trodden down.

The Incarnation, the first step; “God was manifest in the flesh”. His coming was marked by an absence of the spectacular. Only a mere handful of humble shepherds “found” Him, Luke 2:16, and wise men from the east enquired, “Where is he ?”, Matthew 2:1 -2. No peal of bells, no public holiday or announcement to mark what must ever remain one of the most tremend­ous events in time or eternity. This first step was not His beginning but a stage, as it were, in a timeless history, for, “he was rich, yet for your sakes, he became poor, that ye through his poverty might be rich, 2 Corinthians 8:9. Thus, God “manifest in flesh” is the Creator coming into the world to be­come the Redeemer. He held the highest place above, Adored by all the sons of flame, Yet such His self-denying love. He laid aside His crown and came.

“Justified in the Spirit”.

This speaks of the descent of the Spirit of God upon Christ at His baptism by John in the river Jordan, thus anointing Him, the Man Christ Jesus, for public ministry, as Peter states, “How God anointed Jesus of Nazareth with the Holy Ghost and with power: who went about doing good and healing all that were oppressed of the devil; for God was with him”. Acts 10:38. The Holy Spirit not only descended upon Him as He was baptized in Jordan but “abode on him”; thus “justified in the Spirit”, He was publicly marked out as the Christ, the Anointed, the Messiah.

The angels, we are told by Peter, are desirous of look­ing into these things connected with the preaching of the gospel with the Holy Ghost sent down from heaven, 1 Peter 1:11-12. God “manifest in the flesh”, in true Manhood, and seen of angels in this revelation of Himself, must have been a cause of their wondering “at mysteries so bright”. They saw Him as He moved in the world from Bethlehem to the tree, in His temptation in the wilderness, out of which He came, unscathed, un­tainted and victorious, and “the angels ministered unto him” Mark 1:13. In His agony in Gethsemane, accepting the cup of sorrow and shame He was about to drink for our salvation, know­ing fully the bitterness of that which was immediately before Him, “there appeared an angel unto him from heaven, strengthening him”, Luke 22:43. How these heavenly spectators must have been filled with wonder as they beheld these mysterious scenes!

Preached among the Nations.

No longer is the divine favour extended exclusively towards the “Jews only”; the old hindrances to Gentile blessing are removed, and Jew and Gentile are now to hear of a “Saviour, which is Christ the Lord”.

When He had mentioned occasions of Gentiles coming into any special favour, such as the widow of Sarepta, and Naaman the Syrian, the synagogue congregation He was addressing in Nazareth “where he had been brought up” was “filled with wrath”, Luke 4:25-28. Such was the characteristic bigotry of the Jew. Now He is “preached unto the Gentiles”, or nations, the grace of God has broken down that middle wall of partition. The cross was the expression of the fact that “God so loved the world” and “preached unto the Gent­iles” was the method used in making known this fact to that world of man­kind He so loved. How great a sense of responsibility and of honour gripped the hearts of the earliest preachers of the gospel! For, says Paul, “necessity is laid upon me; yea, woe is unto me, if I preach not the gospel”, 1 Corinthians 9:16; and others, having suffered the pain and indignity of being beaten, rejoiced “that they were counted worthy to suffer shame for his name”, Acts 5.41.

“Believed on in the World”.

Let us be encouraged by the word. We may never get knowledge of our en­deavour being openly owned and blessed of God, but, rest assured, “your labour is not in vain in the Lord”, 1 Corinthians 15:58. The darkness is now past, even though men love it more than light; the true Light now shines, and wherever its healing rays are seen the darkness must yield. “The light of the knowledge of the glory of God in the face of Jesus Christ” brings souls into the radiance of “the light of the glorious gospel of Christ”, 2 Corinthians 4:4-6: “Believed on in the world”, where He was cast out and rejected of men. The final, and sixth step to the throne, “the sitting-place”, brings our thoughts to His ascension.

Received up in Glory,

Not so much the place, but the manner in which He was received. There must have been a tremendous outburst of holy acclaim as He was received up! The prophetic psalm says, “Lift up your heads, 0 ye gates; and be ye lift up ye everlasting doors, and the King of glory shall come in”, Psalm 24:7. The King of glory is no other than He of whom the prophet speaks as a “man of sorrows”; glory must ever be the proper sphere to which the Man “acquainted with grief” belongs. God, even His God, has anointed Him “with the oil of gladness above thy fellows”, Psalm 45. 7. This is the language used of the King to be manifest yet on earth. He “who was made a little lower than the angels for the suffering of death, crowned with glory and honour”, Hebrews 2:9, is the same Blessed Person who “endured the cross” and “des­pising the shame”. Thus, “he that humbleth himself” is exalted. “God was manifest in the flesh,” tells us of the One who “came into the world to save sinners”, 1 Timothy 1:15; “Received up” in glory tells us of His triumph, and the earth is yet to be ruled by this “same Jesus” who, in His humility, had “not where to lay his head”. The story of His triumphs is not concluded for, “the earth shall be filled with the knowledge of the glory of the Lord, as the waters cover the sea”, Habakkuk 2:14. Waiting for His coming to receive us unto Himself, we know that this will herald the day of His vindication here on earth.

"From the brightness before Him passed His thick clouds, hailstones and coals of fire. The LORD also thundered in the heavens..." Ps. 18:12-13