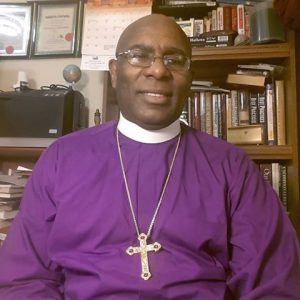 I want to speak to you for the next few days on the theme: God holds us accountable to be faithful “watchmen” to those in whose midst He places us.

I want to read my text for this message from Ezekiel 33:1-9. I do not want to bore you so I will divide this message over a week span. Ministering to a large congregation takes lots of work to be able to unfold the mysteries that God will like us to know. As we celebrate Clergy Appreciation month I find it fitting to deliver a message directly to all clergy reminding us to fulfil our mission and calling.

I have been interacting this week with a Bible passage that is of the latter category. It’s one that, quite frankly, I would prefer not to preach from. But it’s one that I believe the Holy Spirit would have us consider today as a family. I ask that we give ourselves to Him for His instruction today from this difficult passage; and if needs are, also for His gentle rebuke from it.

The passage I’m speaking of is found in the thirty-third chapter of the Old Testament book of Ezekiel. It’s there that we read these words, spoken by God to the prophet Ezekiel:

Again the word of the LORD came to me, saying, “Son of man, speak to the children of your people, and say to them: ‘When I bring the sword upon a land, and the people of the land take a man from their territory and make him their watchman, when he sees the sword coming upon the land, if he blows the trumpet and warns the people, then whoever hears the sound of the trumpet and does not take warning, if the sword comes and takes him away, his blood shall be on his own head. He heard the sound of the trumpet, but did not take warning; his blood shall be upon himself. But he who takes warning will save his life. But if the watchman sees the sword coming and does not blow the trumpet, and the people are not warned, and the sword comes and takes any person from among them, he is taken away in his iniquity, but his blood I will require at the watchman’s hand.’

“So you, son of man: I have made you a watchman for the house of Israel; therefore you shall hear a word from My mouth and warn them for Me. When I say to the wicked, ‘O wicked man, you shall surely die!’ and you do not speak to warn the wicked from his way, that wicked man shall die in his iniquity, but his blood I will require at your hand. Nevertheless, if you warn the wicked to turn from his way, and he does not turn from his way, he shall die in his iniquity; but you have delivered your soul (Ezekiel 33:1-9).

Here, we see God speaking to Ezekiel about his role to his people. Ezekiel was a priest during the time when the Jewish people were removed by God from their homeland because of their sinfulness and idolatry and were taken captive into the land of the Babylonians. God had called him to a prophetic ministry in Babylon, and to the captive people of Judah during the dark time of their exile from their homeland. And God uses the figure of a “watchman” to describe Ezekiel’s role.

It was the task of the watchman to position himself high on the city wall or on a tower, watch carefully, see if an enemy approached the land, and take up his trumpet and blow the warning to his people. His service to his people was a matter of life-and-death importance! If he should fail to see the enemy approaching, or if he should–for whatever reason–fail to blow the warning signal, some of his people would perish. But if he was faithful, and if he succeeded in warning them, the lives of many of his people would be spared. The armies of his people would be able to prepare themselves in time, meet the enemy with a sufficient defensive attack, and perhaps save the city or the nation from destruction and loss.

Obviously, the watchman had to be a trustworthy man. He had to be faithful and alert to his task–a man who understood the significance of his purpose, and who gave himself fully to it. It may have been an unwelcome message he had to give at times; but he had to be utterly committed to giving it when it was needed–no matter what the cost.

And here, God calls Ezekiel to be a most sobering and serious task–a task for which Ezekiel will be held responsible by God to the highest possible degree. He was appointed by God to be a spiritual “watchman” to his people. He was called to “blow” a warning that the people didn’t want to hear.

I believe that our passage today is a particularly important word from God to pastors such as myself. As one charged with the task of preaching, it is the pastor’s duty to be faithful–no matter what the cost–to fulfil the mandate from God given through the apostle Paul to Timothy:

I charge you therefore before God and the Lord Jesus Christ, who will judge the living and the dead at His appearing and His kingdom: Preach the word! Be ready in season and out of season. Convince, rebuke, exhort, with all longsuffering and teaching. For the time will come when they will not endure sound doctrine, but according to their own desires, because they have itching ears, they will heap up for themselves teachers; and they will turn their ears away from the truth, and be turned aside to fables. But you be watchful in all things, endure afflictions, do the work of an evangelist, fulfil your ministry (2 Timothy 4:1-5).

But I also believe that it is a work that each one of us is charged with as believers. As a pastor and a preacher, I am an ambassador for Christ in this world (2 Corinthians 5:18-20). But so are you, my dear brother and sister. The Lord Jesus has given it to all of us in the church–together–to be “the light of the world” (Matthew 5:14).

And what’s more, you even have a ‘watchman-like’ duty to perform toward those who profess the Name of Jesus Christ and who claim to be His followers. The apostle James speaks these sober words;

My beloved brethren, if anyone among you wanders from the truth, and someone turns him back, let him know that he who turns a sinner from the error of his way will save a soul from death and cover a multitude of sins (James 5:19-20).

So; you and I are called to the task of Watchmen! And as I read today’s passage from Ezekiel 33, my question to you today–as well as to myself–is this: What kind of a watchman, dear brother or sister, will we prove to be? Will we prove to be faithful to our watchman’s call.

Look at this passage with me again, and notice some of the principles we can learn from it.

God spoke to Ezekiel and said, “Son of man, speak to the children of your people, and say to them, ‘When I bring a sword upon a land, and the people of the land take a man from their territory and make him their watchman . . .”

One of the remarkable things that God says in these opening words is that the sword was coming upon the land because He–God Almighty—was bringing it upon the land. It may be that one nation comes upon another for its own reasons; just as the nation of Babylon came upon the land of Judah for its own reasons. But whatever its motivation, it ultimately comes because God brings it; just as it was God who sent Babylon to Judah in order to punish and correct His disobedient people.

But God–in mercy–does not leave His people without the warning of a watchman. He brings the sword of discipline, but it isn’t His will that the people perish. If you look down to verse 11, you see that God tells Ezekiel, “Say to them: ‘As I live,’ says the Lord GOD, ‘I have no pleasure in the death of the wicked, but that the wicked turn from his way and live. Turn, turn from your evil ways! For why should you die, O house of Israel?'” That’s God’s desire–the repentance of those against whom He brings the sword. And so, He is merciful and permits that a watchman is raised to give His people a warning.

And the thing that I ask you to notice is from where it is that the watchman is taken. He says, “. . . and the people of the land take a man from their territory and make him their watchmen . . .” It’s someone that comes from out of the midst of the people themselves. It is one of them–someone they know, and trust, and can relate to.

I see in this a very important spiritual principle that relates to us who are given the watchman’s call. God does not send angelic beings from heaven to be the ‘Watchmen’ to His people. Rather, He has chosen to take fallen, sinful people, redeem them, make them His spokesmen and spokeswomen, and leave them in the midst of the people from whom they were drawn.

My brothers and sisters; it is not by accident that you have the family you have, or live in the neighbourhood you live in, or work with the people you work with, or dwell in the midst of the culture in which you dwell, or are a citizen of the nation you call home! God has called you to be His spokesperson–His “watchman”–to your people!

Are you a good, faithful watchman in the place He has divinely, sovereignly called you and appointed you? Are you faithful to speak His word to those to whom He has given you?

It will be ten years since the establishment of The Mystical Order with registration following a year later.16/09/2020
THANKS FOR YOUR SUPPORT OVER THE YEARS
-339Days -15Hours -4Minuts -11Seconds