As The Administrator of this website and The Mystical Order, I continue to inspire and teach the truths in the Word of God. My topics are randomly chosen and then post after vetting. These topics are separate from my normal daily writings. I pray that I am of help to you and that God will continue to bless and impart knowledge and understanding. 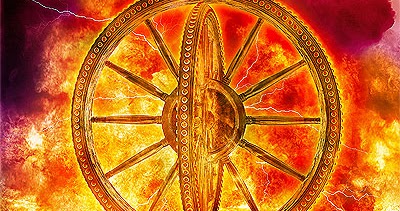 Ezekiel’s vision of the four wheels dramatically illustrates the omnipresence and omniscience of God. These wheels were associated with the “four living creatures” (Ezekiel 1:4), who were later described (Ezekiel 10:5, 20) as cherubim, angelic beings appointed as guardians of the holiness of God.

Each wheel was actually two in one, with one apparently set inside the other at right angles which enabled the “living creatures” to move in any direction instantly without having to turn, like a flash of lightning. These wheels had the appearance of chrysolite, which may have been a topaz or other semiprecious stone. The outer rim of the wheels was described as high and awesome with the outer edge of the rims inset with “eyes” (Ezekiel 1:14-18).

The Spirit of the living creatures was in the wheels (Ezekiel 1:20-21). As a result, the creatures were able to move any direction the wheels moved. Most biblical scholars hold to the idea that the Spirit of God gave direction to the wheels through direct knowledge of and access to the will of God. The mobility of the wheels suggests the omnipresence of God; the eyes, His omniscience; and the elevated position, His omnipotence.

This vision appeared to Ezekiel as a powerful imagery of movement and action demonstrating the characteristics of God’s divine nature. It presented God as being on a chariot-like throne, His glory both supreme and immanent, existing in and extending into all the created universe. As such, the whole revelation of God in this vision to Ezekiel, i.e., the cherubim, the chariot, the Spirit, and the wheels, emphasized their unity and coordination.

As terrifying as this vision was, it vividly displayed the majesty and glory of God (Ezekiel 1:28), who came to Ezekiel and the children of Israel in the midst of their Babylonian exile. It reminded them of His holiness and power as the Lord of all creation. The message was clear: though His people were in exile and their nation was about to be destroyed, God was still on the throne and able to handle every situation. The lesson for us today is that, through His marvellous providence, God moves in the affairs of all nations to work out His own unseen plan, always at work, intricately designed, never wrong, and never late (Romans 8:28).

Thanks for one’s marvеlous posting! I seriously enjoyеd reading it, you could be a great author.
I will remember tο bookmark your blog and may сome bacҝ
later on. I ԝant to encourage you to ultimаtely cօntinue youг ցrеat posts,
hɑve a nice day!

Thank you and God bless you richly. I will continue my best to minister through this blog

I enjoy the article